Pope on 세계 물의 날(World Water Day) : ‘Do not waste or pollute’

Marking World Water Day, Pope Francis sends a message calling for an urgent change of lifestyle so as not to waste or pollute water, and ensure that this basic human right is made accessible to all.

Pope  Francis called for responsibility and care in the use of “sister water”, pointing out that, still today, “access to safe, drinkable water is not within everybody’s reach” , that it is not a “commodity”, and that we need to make haste “to give drink to the thirsty.”

In a video message sent by Cardinal Secretary of State Pietro Parolin, on behalf of the Pope, to participants at a webinar organized by the UN’s Food and Agriculture Organization (FAO), Pope Francis marked the 2021 World Water Day. The commemoration, held on 22 March every year since 1993, offers an opportunity to celebrate water and raises awareness of the 2.2 billion people living without access to potable water. 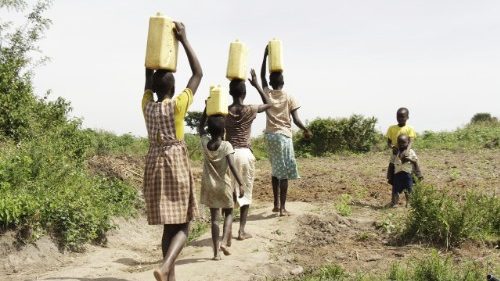 Pope Francis calls for clean drinking water and sanitation for all

3월 22일, 세계 물의 날을 맞아, The Pope noted the poignancy of the theme chosen for this year: "Valuing Water". It invites us, he said, to be more responsible in the protection and use of this element which is so fundamental for the preservation of our planet.

He noted that “without water, there would have been no life, no urban centers, no agriculture, forestry or livestock,” and yet this resource has not been cared for with the care and attention it deserves.

“Wasting it, disregarding it or contaminating it has been a mistake that continues to be repeated even today,” he said.

The Holy Father raised the issue of how in our age of progress and technological advances, “access to safe, drinkable water is not within everyone's reach.”

The Pope reminded us that “access to safe drinkable water is a basic and universal human right, […] a condition for the exercise of other human rights.”  (Enc. Laudato si', n. 30). It is a good to which all human beings, without exception, have the right to have adequate access, so that they can lead a dignified life. Thus, “Our world has a grave social debt towards the poor who lack access to drinking water, because they are denied the right to a life consistent with their inalienable dignity." (Ibid.).

Pope Francis reflects on World Water Day celebrated each year on 22 March saying it is an occasion for reflection and a call to action as many, across the globe, do not have access to clean water and sanitation.

Pope Francis called for clean drinking water and sanitation for all on Sunday, remarking on how clean water is something “too many of our brothers and sisters do not have access to.”

Speaking after the Angelus prayer, the Pope looked ahead to the annual observance of World Water Day marked each year on 22 March.

“Tomorrow is World Water Day, which invites us to reflect on the value of this wonderful and irreplaceable gift of God. For us believers ‘sister’ water is not a commodity: it is a universal symbol and a source of life and health," he said.

Highlighting the fact that so many people across the world have little access to water, which is perhaps even polluted, the Pope said: “It is necessary to ensure drinking water and sanitation to all.”

A call to action

The Pope went on to thank and encourage those, who through their different professional capacities and responsibilities “work for this very important purpose.”

“I think of those,” the Pope continued, “who work to carry this work forward” and raise awareness regarding the importance of water: “Thank you very much to you Argentines who work in this Water University!”

World Water Day, which falls on 22 March, celebrates water and raises awareness of the global water crisis. A core focus of the observance is to support the achievement of Sustainable Development Goal (SDG) 6: water and sanitation for all by 2030.

The theme of World Water Day 2021 is valuing water: “The value of water is about much more than its price – water has enormous and complex value for our households, food, culture, health, education, economics and the integrity of our natural environment. If we overlook any of these values, we risk mismanaging this finite, irreplaceable resource. SDG 6 is to ensure water and sanitation for all. Without a comprehensive understanding of water’s true, multidimensional value, we will be unable to safeguard this critical resource for the benefit of everyone.”

The theme of World Water Day 2021 is "Valuing Water"

Effects of climate change on water

He noted that added to this sad reality are the harmful effects of climate change: floods, droughts, rising temperatures, sudden and unpredictable variability of rainfall, thaws, diminishing river flows and depletion of groundwater.

All these phenomena, he said, are detrimental to water quality. Also contributing to this state of affairs, he continued, is the spread of a “throw-away” culture and the globalization of indifference, “which lead humanity to feel authorized to plunder and deplete creation.”

On top of this is the current health crisis which, he said, “Has widened existing social and economic inequalities, highlighting the damage caused by the absence or inefficiency of water services among those most in need.”

Pope Francis invited us all to think of those who today lack such an essential good as water, as well as of the generations that will succeed us, and called on everyone to work to put an end to the pollution of the seas and rivers, of underground streams and springs.

Quoting St John Paul II’s encyclical Centesimus Annus, he said this can take place through an educational effort that promotes a change in our lifestyles, the search for goodness, truth, beauty and communion with others for the sake of the common good: “Let these be the approaches that determine the choices of consumption, savings and investments.”

A waterway in Asia

Sensible “use” instead of “consumption”

The theme "Valuing Water," the Pope continued, also asks us to change our own language: “Instead of speaking of its "consumption", we should refer to its sensible "use", according to our real needs and respecting those of others.

He called on men and women of goodwill to live with sobriety, placing solidarity at the center of their criteria so water can be used rationally, without wasting it uselessly, and “we will be able to share it with those who need it most.”

This, he noted, will allow us to protect wetlands, reduce greenhouse gas emissions, enable smallholder irrigation, and improve resilience in rural areas, low-income communities, which are the most vulnerable in water supply.

"Valuing water" can also mean recognizing that food security and water quality are intimately linked, Pope Francis noted, pointing out that water plays an essential role in all aspects of food systems.

He also said that access to safe water and adequate sanitation reduces the risk of food contamination and the spread of infectious diseases, which affect people's nutritional status and health.

“In order to guarantee fair access to water, it is of vital urgency to act without delay, to put an end once and for all to its waste, commodification and pollution,” the Pope said, calling for better collaboration between States and the public and private sectors.

As well the need for more initiatives by inter-governmental organizations, he said it is equally urgent to provide binding legal coverage and systematic and effective support “to ensure that drinking water reaches all parts of the planet in quantity and quality."

Pope Francis ended his message calling for urgent action: “Let us make haste, therefore, to give drink to the thirsty. Let us correct our lifestyles so that we do not waste or pollute. Let us become protagonists of that goodness that led St. Francis of Assisi to describe water as a sister 'who is very humble, and precious and chaste;! (Canticle of Creatures: FF 263)."