On Holocaust Remembrance Day, Pope says remembering is an expression of humanity

At his General Audience on Wednesday, Pope Francis marks International Holocaust Remembrance Day, observed on the anniversary of the liberation of Nazi concentration and extermination camp at Auschwitz-Birkenau.

Today we commemorate the victims of the Holocaust and all those persecuted and deported by the Nazi regime,” Pope Francis said at his weekly General Audience.

His remarks came on International Holocaust Remembrance Day, which occurs each year on the anniversary of the liberation of Auschwitz-Birkenau – the largest Nazi concentration and death camp – by the Soviet Red Army during the Second World War. 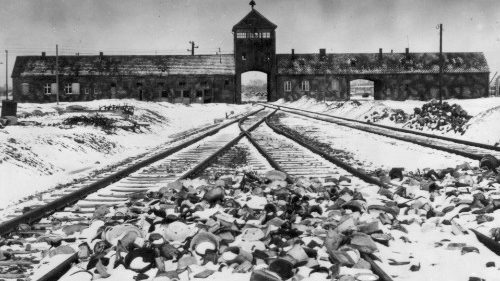 Pope calls for remembrance and prayer on Auschwitz liberation anniversary

Director of Auschwitz: Memory is essential

Pope Francis continued, saying, “Remembering also means being careful because these things could happen again, beginning with ideological proposals intended to save a people and ending by destroying a people and humanity.” He warned that we must be attentive “to how this path of death, of extermination, and brutality begin.”

The Pope’s words echoed his message at last year’s observance of the Day of Remembrance, when he called on everyone to mark the day by taking a moment of prayer and recollection, “saying in our hearts, ‘Never again!’” Pope Francis appealed for remembrance of the Holocaust, saying, “In the face of this immense tragedy, indifference is not admissible and memory is due.”

Pope Francis himself visited the Auschwitz-Birkenau Memorial and Museum, on the site of the infamous Nazi death camp, during his visit to Poland in 2016. He became the third Pope to visit the site, following Pope St John Paul II and Benedict XVI.

Pope Francis’ visit was marked by profound silence, beginning with his passage through the gates to the camp, marked by the notorious slogan, “Arbeit macht frei” – “Work sets you free.” He prayed in silence in the cell of St Maximilian Kolbe, who gave his life for a fellow prisoner in the camp; and later met with Auschwitz survivors. (See Vatican Radio's report on the Pope's visit to Auschwitz-Birkenau in the Vatican Radio. Topics POPE FRANCIS / 27 January 2021, 11:40

‘Overcome prejudice and get involved in the lives of others'

Pope Francis explained that in this episode, the apostle highlights two “transgressions”:

“The first transgression is that of the leper,” he said, whom “despite the prescriptions of the Law, comes out of his isolation and goes to Jesus.”

He explained that the man’s illness was considered a divine punishment, but, “in Jesus, he is able to see another aspect of God: not the God who punishes, but the Father of compassion and love who frees us from sin and never excludes us from His mercy.”

The sick man, the Pope continued, is thus able to emerge from his isolation because in Jesus he finds God who shares his pain.

“The second transgression is that of Jesus: even though the Law prohibited touching lepers, He is moved, extends His hand and touches him to cure him. He does not limit himself to words, but touches him,” he explained.

To touch with love, Pope Francis continued, means “to establish a relationship, to enter into communion, to become involved in the life of another person even to the point of sharing their wounds.”

With that gesture, he said, Jesus reveals that God is not indifferent, does not keep Himself at a “safe distance”: “He draws near out of compassion and touches our life to heal it with tenderness."

This, the Pope said, "is God's 'style': closeness, compassion, and tenderness: the 'transgression' of God. In this sense, He is a great transgressor."

Do not fear "contamination"

Decrying the fact that in the world today, so many of our brothers and sisters suffer marginalization and exclusion because of social stigmas, the Pope invited the faithful to break these barriers and get involved with their lives.

He said Jesus tells us that God “is not an idea or an abstract doctrine but the One who contaminates Himself with our human woundedness and is not afraid to come into contact with our wounds." The Pope urged Christians to go beyond selfishness, calculations or fears that prevent them from getting involved with the sufferings of others.

Instead, he said, let us ask the Lord for the grace to find the courage to emerge from our isolation and self-commiseration, and open our hearts to "a love that goes beyond conventions, that overcomes prejudices and the fear of getting involved with the lives of others."