Vatican Secretary for Relations with States, Archbishop Paul Richard Gallagher, recalls the 9/11 terrorist attack on the US on its 20th anniversary. He underscores the importance of education to fraternity in the fight against terrorism.

By Vatican News staff reporter: Since the terrorist attacks on the United States on September 1, 2001, diplomatic activities of countries around the world have included not only a search for effective responses to threats by fundamentalist groups but also a study of the role and use of religion in the lives of people and societies.  This process must also include the education to peace, coexistence and fraternity.  Vatican Secretary for Relations with States, Archbishop Paul Richard Gallagher, made the remark ahead of the 20th anniversary of the terrorist attacks on the Twin Towers of New York, on Saturday.

In four coordinated attacks on September 11, 2001 (simply known as ‘nine-eleven’ or 9/11), terrorists hijacked 2 commercial airliners and rammed them into the Twin Towers of New York’s World Trade Centre, which collapsed later.  The attack killed nearly 3,000, injured over 25,000, and caused at least $10 billion in infrastructure and property damage.

Terrorists also hijacked 2 other airliners, with one crashing into the side of the Pentagon in Virginia, and the other crashed in a field near Shanksville, Pennsylvania.

In an article in the Vatican’s newspaper L’Osservatore Romano, Archbishop Gallagher encouraged anti-terrorism diplomatic efforts already underway, without being afraid to look at the causes that generate such fratricidal attitudes.  In this regard, he said, Pope Francis and the Grand Imam of Al-Azhar Ahmad Al-Tayyeb point out in the document on Human Fraternity that terrorism is due to the "an accumulation of incorrect interpretations of religious texts and to policies linked to hunger, poverty, injustice, oppression and pride”.

Hence there is the need to stop supporting terrorist movements through financing, providing weapons and strategy, and by trying to justify these movements using the media.  “All these must be regarded as international crimes that threaten security and world peace,” the document says.  Archbishop Gallagher pointed out that this political action by all countries must be accompanied by education to peace, coexistence and fraternity.

The Vatican Secretary for Relations with States, whose portfolio is equivalent to foreign minister’s, pointed out that the Pope stresses on this type of education in this encyclical Fratelli tutti.  “What happens when fraternity is not consciously cultivated, when there is a lack of political will to promote it through education in fraternity, through dialogue and through the recognition of the values of reciprocity and mutual enrichment?” the Pope asks in his encyclical.  In this situation, Archbishop Gallagher said, freedom is restricted, which becomes a ground for the ideology of terror.  However, this could be defeated by an education of younger generations that truly aims at rejoicing in being together, at understanding that diversity, even in religious affiliation, is not a source of difference and hostility but of mutual enrichment, without having to give up one's own creed or even water it down.

Looking back at the terror acts of two decades ago, Archbishop Gallagher recalled how blind and destructive hatred killed and hurt innocent people of many nations and hit the US at the heart. The terrorist attacks still bring tears to many. 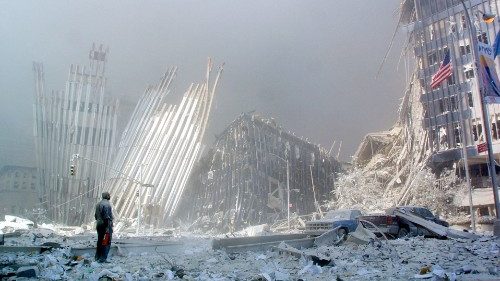 He recalled how deeply disturbed Saint Pope John Paul II was on hearing of the tragedy, that he interrupted his normal activity to gather in silent prayer to implore eternal rest for the numerous victims and courage and comfort to their families.  On welcoming the new US ambassador to the Holy See, James Nicholson, on 13 September 2001, Pope John Paul described it as an “inhuman” act.

Overwhelmed by the immense scale of this tragedy, we seek Your light and guidance as we stand before such tremendous events".   He  asked for "the wisdom and courage to work tirelessly for a world in which authentic peace and love reign among nations and in the hearts of all."

Archbishop Gallagher also recalled that the US Conference of Catholic Bishops has repeatedly denounced the inhuman and unacceptable nature of terrorism that kills innocent people in the name of God. On the 10th anniversary of 9/11 in 2011, the bishops reiterated their resolve to reject all extreme ideologies that perversely abuse religion to justify indefensible attacks against innocent civilians. At the same time, they also expressed their firm resolve to embrace people of all religions, including their Muslim neighbors, and to welcome refugees in search of safety. Mindful of the ongoing sacrifices of the men and women of the US military and their families, the US bishops in 2011 had the need to responsibly and wisely end the conflicts in Afghanistan and Iraq.

The Vatican official pointed out that the 9/11 events made the international community reflect on the abuse of religion for terrorism. St. John Paul II and his successors have unequivocally condemned it saying, “it is a profanation of religion to proclaim oneself a terrorist in the name of God, to kill and rape man in the name of God”. “Terrorist violence, in fact, is contrary to faith in a God who is the Creator of man, a God who cares for and loves man," St. John Paul II had said in 2002.

Various commemorative events have been lined up to mark the 35th anniversary of the Marian Shrine. The events will run from Sunday, 24 October 2021, till 6 February 2022.

Recently, the Rector of the Marian shrine, Father Eugene Adingra, unveiled some of the major events that will take place during the months of commemoration.  He said the celebrations would be of a thanksgiving nature: Thanksgiving for many graces received through the intercession of the Blessed Virgin Mary. He added that countless persons have testified to graces granted them through the intervention of the Virgin Mary.

A shrine loved even by non-Catholics

According to Fr Adingra, the Shrine of Our Lady of Africa in Ivory Coast is loved by all -even by many other ‘children’ of the Blessed Virgin Mary. They come from all over the country and beyond to pray at the Shrine and testify of graces received.

“Protestants, Methodists, Evangelicals, and even Muslims, not to mention our brothers and sisters from traditional religions. They have all trodden the grounds of this Marian shrine to implore the intercession of the Virgin Mary, and they have been heard,” Fr Adingra said.

He continued, “The Virgin Mary, mother of all the children of God, never ceases to demonstrate her maternal tenderness without the slightest distinction. That is why we want to celebrate these 35 years by simply saying, ‘Thank you to the Lord, thank you to Mary,’” the Marian Shrine Rector explained.

Built between 1985 and 1987, the Marian Shrine has become an important place of the Marian pilgrimage in Côte d’Ivoire.

Pope Saint John Paul II blessed the first stone of the building in 1980 during his first visit to Côte d’Ivoire.

The Holy Father, himself, suggested that the Shrine be dedicated to ‘Our Lady of Africa.’ Cardinal Bernard Yago, then Archbishop of Abidjan, added: “Mother of All Graces.”