Polish bishops to Churches in Russia and Ukraine: pray for peace !

On the Feast of Saints Cyril and Methodius, the head of the Catholic Polish Church addresses a letter to Christian Russian and Ukrainian leaders calling on them to join in prayer for peace in Ukraine. Recipients of the letter include Patriarch Kirill of Moscow and All Russia, the two Orthodox Primates of Ukraine as well as the Head of the Ukrainian Greek Catholic Church and Archbishop Paolo Pezzi, President of the Catholic Bishops' Conference of Russia.

As the winds of war threaten Eastern Europe, the President of the Polish Bishops’ Conference, Archbishop Stanisław Gądecki, is calling both Catholic and Orthodox believers in Poland, Russia and Ukraine to join in fervent prayer that armed conflict might be averted.

A tragedy for humanity

In a letter translated into Russian and Ukrainian, the Archbishop of Poznań once again reiterates that “any war is a tragedy for humanity".

“Thousands of people die. Many of them on both sides remain handicapped and millions carry inner wounds that are difficult to heal.”

Archbishop Gądecki says the fact that Ukrainians and Russians are both Christian and Slavic peoples adds to the tragedy: “From both the human and divine point of view - he says - these two peoples should have much in common and tend not to hatred, but to mutual respect and friendship. However, an indispensable condition is respect for the rights of peoples, including the right to self-determination and territorial integrity”. 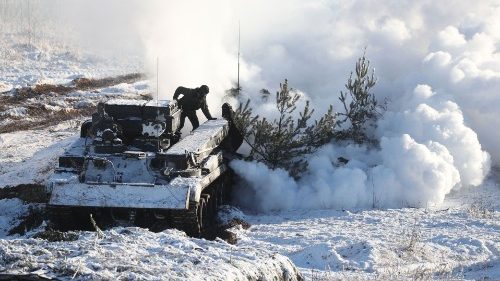 Citing Pope Saint John Paul II’s words in his Message for the World Day of Peace of 2000, the Polish prelate further recalls that the twentieth century "bequeathed to us the warning that wars are often the cause of further wars because they fuel deep hatred, create situations of injustice and trample upon people's dignity and rights".

“Wars generally do not resolve the problems for which they are fought and therefore, in addition to causing horrendous damage, they prove ultimately futile””

Noting that Poland Russia and Ukraine have "a common history and Christian faith”, Archbishop Gądecki, therefore, calls on the Polish faithful “to raise their heartfelt prayer” to God for peace in Ukraine.

“May our prayer effort be a cry to prevent the suffering and death of thousands of innocent human beings, especially the weakest and most vulnerable, who will not have the strength and opportunity to escape the outbreak of war.”

He then turns to the Orthodox and Catholic religious leaders of both Ukraine and Russia, calling upon them to address similar appeals to their respective faithful “so that the Lord may convert the hearts of rulers from the desire of war and destruction, to mercy and peace”.

“May the Saints Cyril and Methodius, apostles of the Slavs, obtain from God the gift of peace for Europe”, the letter concludes. Listen to our report

Nuncio to Ukraine: we are brothers

The importance of praying together with other Churches in both countries to avert war has also been emphasized by the Vatican Nuncio to Ukraine, Archbishop Visvaldas Kulbokas. Speaking with Vatican News, the prelate remarked that the more Churches are united and understand each other, the stronger they are able to effectively bear witness to the Gospel.

“The mission of the Church is to consider everyone as brothers, so when we speak of dialogue and when we pray for dialogue, as a Church we know that it is our mission to illuminate dialogue”, he said. “When I pray for peace, I know only too well that at any moment our Lord Jesus is capable of enlightening one or the other politician, one or the other military, and change their decisions radically”.

A glimmer of hope

Though the situation remains tense, Russia's Foreign Minister Sergey Lavrov offered a glimmer of hope on Monday by telling President Vladimir Putin they should have more time to discuss US proposals for the future of European security. In a televised meeting, Mr Putin was told that diplomatic talks had “not yet been exhausted”.

Also, German Chancellor Olaf Scholz, speaking in Kyiv on Monday ahead of a visit to Moscow, played down the prospect of Ukraine joining Nato in the near future —  one of Russia's main concerns — by saying this was "not on the order paper".